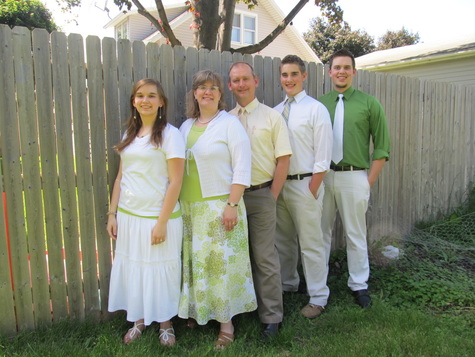 Terry and his wife Sarah were both saved at an early age and grew up attending church and Christian schools.  Upon their high school graduations, the Lord impressed upon both of their hearts to attend Bob Jones University in Greenville, South Carolina.  Terry had a strong interest in Christian missions and aviation.  As a result, he enrolled in and completed a five-year Missionary Aviation degree.  Sarah, who also felt God’s leading toward the mission field, majored in missions at BJU.

During their college years, both Terry and Sarah were involved in short-term missionary outreaches to Northern Canada.  It was while during the first summer of these mission teams that Terry and Sarah met each other.  Shortly after Terry’s graduation from college, the two were married and began their lives and ministry together.  The Lord has given them three wonderful children:  Michael, Karis and Bradley.

After their wedding, Terry accepted an aviation job in the same community where he had ministered on the mission team, Uranium City, Saskatchewan, Canada.  They served there assisting in a church-planting and Bible camp ministry for eleven years.  In 2002, God redirected their vision to the ministry of Wings As Eagles Mission Air Service.

Wings As Eagles Mission Air Service is a ministry of Wyldewood Baptist Church in Oshkosh, Wisconsin.  In 1995, Wyldewood became the home and sending church for the Rushings and commissioned them for missionary service.  The purpose of Wings As Eagles is to help involve and expose pastors and local church people to the mission field and assist missionaries on the field in their church-planting efforts.

Terry and Sarah’s burden is for lost souls and assisting the vision for missions in the local churches.   Wings As Eagles takes mission trips to Mexico, Canada, the Caribbean elsewhere in the United States, and now even to Africa to work with fundamental Baptist church-planting missionaries.